Skip to content
Notice: Find a program near you
Programs By State 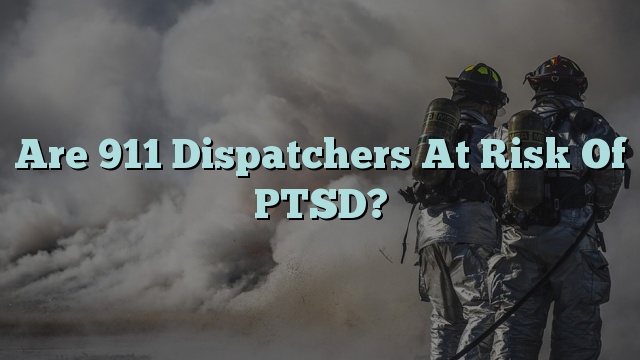 While emergency dispatchers who are calm, cool and collected may not see the carnage that their counterparts, the police, and firefighters see, they may be just as vulnerable or more to the post-traumatic-stress disorders that all of them struggle with.

Those dispatchers who field the 911 calls hear a lot of tragic, soul burning sounds that leave them picturing the worse case scenarios of gunshot wounds, someone’s last words, and those who are threatening or horror, commit suicide. Picture the last words of those in the Twin Towers on September 11, 2001, for a prime example here. The stress of this can cause even the most stalwart of the team to be stressed. Sadly, many can’t leave their screens during the entire process, they can’t take a mental health break in the midst of a crisis.

These are the few, famously anonymous, who are exposed to these tragedies that are very traumatic to those going through them and even more so to those who have no control over the outcome. These are the ones who need help and don’t even know it. Many consider this to be a stressful job, but few consider the trauma that they will undergo.

Lilly, who is the head of NIU’s Trauma, Mental Health and Recovery Lab, and her research associate Heather Pierce are former 911 dispatchers who are married to policemen. They know the trauma from both sides. They know the impact of this crisis firsthand. When asked if they could describe the most difficult calls, they were able to recall some pretty stressful events.

Some Situations Can Be Traumatizing

For most, the worst experiences were those of children in danger or that of sending their friends, the police, and firefighters they knew personally, into harm’s way.

Many were blown away at how difficult this could be. The parent who, after performing CPR for 20 minutes realizes that their child is gone forever.

All that the helpless dispatcher can do is dispatch help and assure the person that “help is on the way”.

Many times, there are feelings of helplessness and there is a horror of the inability to do anything more to help the person. This is a prime breeding ground for PTSD and other mental health issues. Most of the employees will qualify for a PTSD diagnosis when they’re finished working here.

It’s vital to realize that the dispatchers are often the forgotten responders. They’re the ones that get help to the person yet never see the person. They do, however, hear what is going on in its entirety and it’s terrifying to be on the other end of the phone and yet not be able to help. As dispatchers, they have a huge level of responsibility yet, they are removed from it in a way that prevents them from seeing it. In many cases, this is far worse as the mind acts out, even more, carnage than may actually be seen.

Unaddressed The Trauma can create a myriad of issues at home, work, and play. Some of the dispatchers may even become suicidal.

PTSD Is A Real Possibility

Others have the same issues that a combat veteran returning from the war will have. Still, others will have issues getting along with others at work, home, and play. When dispatchers are, however, included in debriefings, there is a better outlook.

Many of the 30-year veterans in emergency dispatch say that with proper training and stress management, there is a reduced incidence of PTSD.

Gavin, a certified instructor, states that the stress of the job and the mental and physical toll often are a result of PTSD. Not taking care of oneself.

Dispatchers need to learn how to recognize that they are having serious PTSD symptoms and that they’re struggling with a call so that they can take some time off if they need it.

A huge stressor is not knowing what happened to the person after help arrived. Not knowing the outcome is just as damaging as hearing that gunshot and sudden silence.

There Are Treatment Options

Many of the 911 departments continue by treating their dispatchers as second-class citizens in spite of the huge burdens that they carry. They feel powerless and must be helped. We need them just as much as they need us. Hearing that someone was shot, burned to death or worse is devastating, but the unknown can have far more serious consequences. We need to reassure these dispatchers that the person made it (or didn’t as the case may be).

Dispatchers can’t get up and take a walk, leave the room or reimage their job at hand. They are stuck at their desk. Unable to take a few moments to recover.

They are working on highly technical computers and under extreme stress. They have a lot to deal with, a lot of information to convey and no everyone is able to do this job. It takes a real strong person to be a 911 dispatcher.

Pursuing A Career As A 911 Dispatcher?

I Am! Not At The Moment

Perfect! Let's get you matched with college programs in your area.

Accessing local schools can help to find a career option that's right for you.